In September 2021, with support from 40+ organizations and 1400 individuals, a DISCLOSE letter was sent to Fidelity Investments and Fidelity Charitable leadership. We called on Fidelity Charitable to “publicly disclose all contributions” and “all related fees” over the last five years to the ten organizations highlighted in this report, and to “share publicly about policies or screens that are currently being used to determine which organizations can receive DAF grants, and provide examples of organizations you have determined will not receive DAF grants based on your criteria.” Fidelity Charitable has failed to respond, has still not publicly acknowledged its role in facilitating financial support for systemic oppression, and has not changed its policies. Instead, when Fidelity leadership responded to our campaign two years ago, they hid behind a “cause-neutral” policy

Now is the time for the people to disclose. Read the report HERE and join an action hour on Tuesday, March 29th at 12PM ET / 9AM PT. 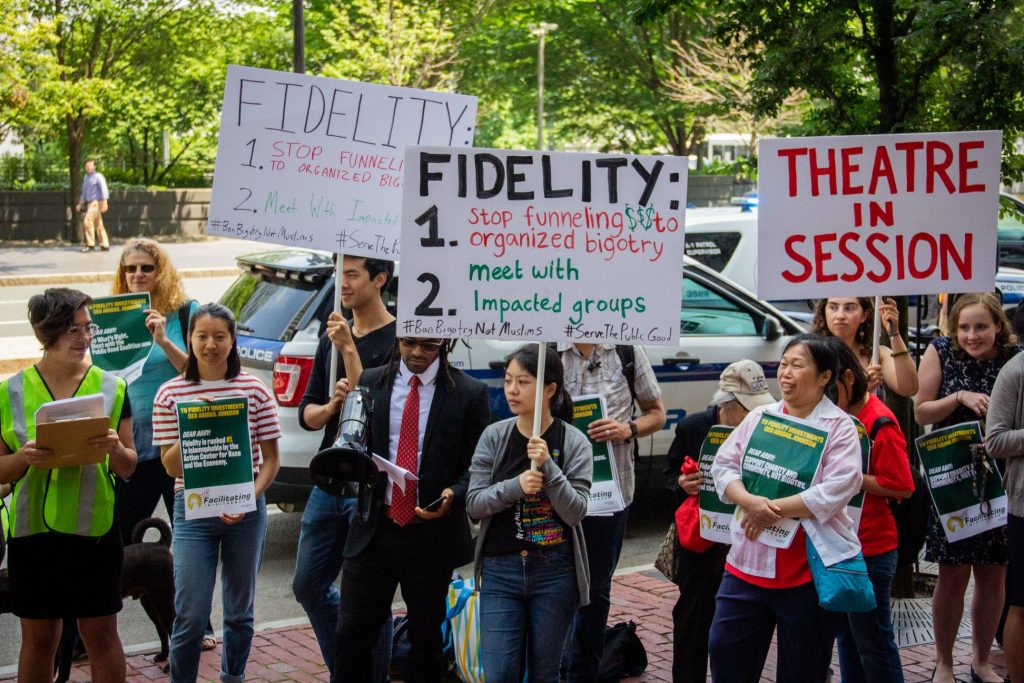 What is a Donor Advised Fund?

A Donor Advised Fund, or DAF, is a type of account which donors–individuals, families, or organizations–set up with a sponsor institution to give to non-profit organizations. In doing so, the donor receives immediate tax benefits and the sponsor institutions can meanwhile invest donations as they see fit. Importantly, once these accounts are set up, the donors do not legally have a direct say over how the funds they deposit are spent. Rather, donors can “advise” the sponsor institution where to direct the funds, but the sponsor institution makes the final decision. Through this process, Donor Advised Funds help people hide the names of the nonprofits where they wish to direct their money and create ambiguity about who is actually financing white supremacy. In effect, the sponsor institution acts as an intermediary, enabling donors who might not want their names publicly associated with groups that fuel white supremacist and fascist to move funds to them anonymously. Moreover, much like a bank, sponsor organizations routinely invest account holders’ money in whatever ways its investment strategists see fit. DAFs are notoriously under-regulated instruments whose shady practices are increasingly under scrutiny.

Why is this campaign targeting Fidelity?

While FI and FC are legally separate, it is evident that their work, communications, and other elements of their businesses are intertwined. We are unwilling to allow Fidelity Investments or Fidelity Charitable to hide behind “cause-neutral” language and recognize an opportunity to impact FC’s practices by using all the levers and power we have access to, from individual and institutional FI account holders to FC DAF account holders to community organizations.

Which organizations are profiting from Fidelity’s Donor Advised Funds?

Through its Donor Advised Funds, Boston-based Fidelity has funneled millions of dollars to frontline anti-Muslim groups, white supremacist and fascist groups organizations, anti-trans and queer groups, and the like, as well as the behind-the-scenes think tanks and bill mills that structurally support these toxic politics. Among the specific white supremacist and fascist groups Fidelity Charitable funds are Alliance Defending Freedom, Central Fund of Israel, Ekal Vidyalaya Foundation, David Horowitz Freedom Center, Federation for American Immigration Reform, and Turning Point USA. Read our full report to dive deeper into the profiles of these organizations.

What can Fidelity really do about this?

Fidelity currently hides behind claims of “neutrality,” but we recognize that in effect, this allows for funding of bigotry, violence, and racism. Fidelity can join a growing group of financial institutions that are adopting policies such as screens to prevent the channeling of funds to groups that profit off of systemic oppression. Fidelity Charitable can implement a filter that stops the flow of financial resources to organizations whose values do not align with the mission of the sponsoring organization. To date, over 80 other financial institutions, such as Amalgamated Bank, have already adopted these policies, setting legal precedents that institutions like Fidelity should heed.

What does this campaign mean for people connected to 501(c)(3) organizations, individual account holders, and grassroots community organizations?

The campaign to hold Fidelity accountable and demand that they disclose the groups to which they are channeling funding implicates all who believe in justice and healing. If you are a 501c3 organization or individual account holder with Fidelity, you can support our efforts to demand that Fidelity filter out white supremacist and fascist groups from donations. If you are a grassroots organization, especially if your members are targeted by formations Fidelity is financing, you can help amplify our demands to Fidelity to cut the funding cord. This toolkit contains resources for everyone to get involved.

I’m interested in learning even more about Fidelity’s role in funneling money to white supremacist and fascist violence. Do you have more resources?

Yes! Check out our 2021 webinar and news articles below for further information.